This recent meeting has really taught me the power of social media.

In July last year I was showing work at the Kentish Town Fare (alongside Free Space Gallery) when a lady came over and said immediately ‘are you Veronica?!’ it transpired that this lady was Vivienne Hollis talented artist  and founder of Artist collective Artists Who.

I started following Vivienne on Facebook and fell in love with her work, her style is so strong and work mesmerisingly beautiful, it fills me with inspiration to view the bright colours and intricate stitching and adornment in her works, i could lose myself for hours!

I’m delighted to say that were planning a joint show for next year…..watch this space for details! 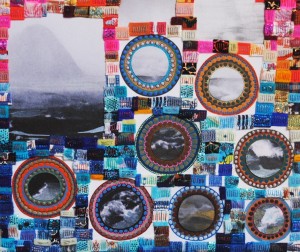 I can’t wait to see our work up together!

I just got my entry in this morning for The Serco Prize for Illustration 2014: 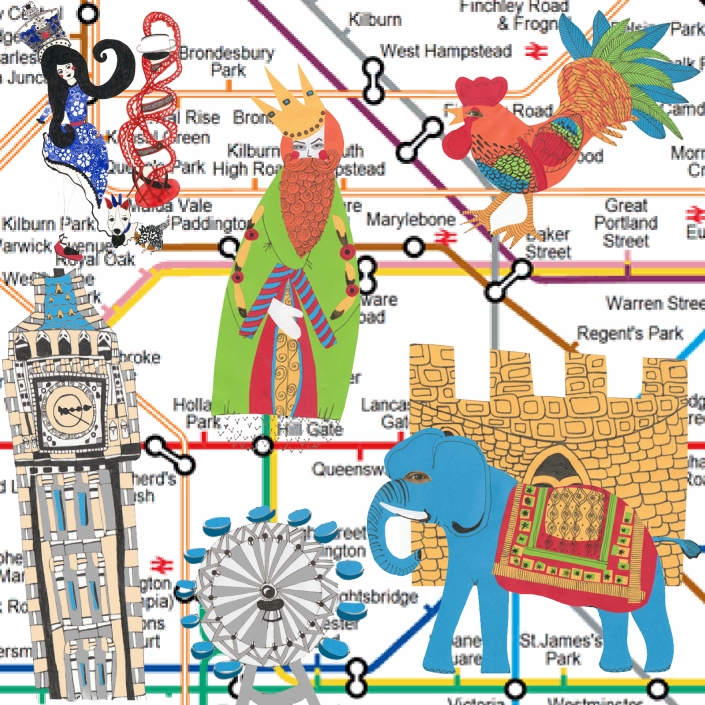 I created Illustrations which I associate London tube names with…..

So the last twelve months I’ve been updating lots on my Interactive Wallpaper Project, in which I’ve hand Illustrated a roll of wallpaper, taking it around London Galleries and Spaces including: Debut Contemporary, CGP Gallery and Free Space Gallery asking members of the public to colour in or paint the characters.

I’ve now set up a Just Giving Page in which people can name a character in honour a loved one or indeed themselves as a lasting tribute to everyone whose fought Cancer. In return for the donation I will name a character of you choice after that person, or for a donation of fifteen pounds I will Illustrate that person onto the wallpaper by hand.

The two completed rolls of wallpaper will be exhibited at a solo show at Free Space Gallery in February 2015.

I lost my dear Stepfather Tim to Bowel Cancer in 2009 and now want to put my creative energy into  a project to help others and to honour Tim.

As a child with my Mum and Tim

Combining two of my favourite things: embroidery and Pop Art………I wanted to convey my thoughts on how females (sometimes) treat each other, although all appears to be sweet on the outside: https://missvdesigns.wordpress.com/2014/09/08/how-women-sometimes-treat-women/ this is something which dominates my thoughts a great deal! Also with embroidery often being viewed as ‘woman’s work’ I felt it highly appropriate for this creation.

Once finished this piece will be exhibited alongside work of the talented Debut Artists at Debut Contemporary’s PV ‘Human Suffering’.

My new Artwork on the theme of ‘Human Suffering’ is developing nicely, at the moment the viewer is semi presented with the image of two girls wearing the same vintage inspired yellow, mohair jumper sharing the limelight

As it develops it changes further from my original idea of two women fading into a mist (one pulling the other’s hair) in fact  the original image of the changing woman is only a ghostly image which isn’t completely visible…..it’s funny how  an Artwork follows it own path and the concept becomes more obscure but is still based on these deep feelings/ideas.

It was a lovely morning, buzzing with people waiting for their doctors appointments and many got involved and added to the wallpaper…which is looking GREAT!

Thank you to everyone who’s added to the wallpaper so far and to those who have donated to the charities. x 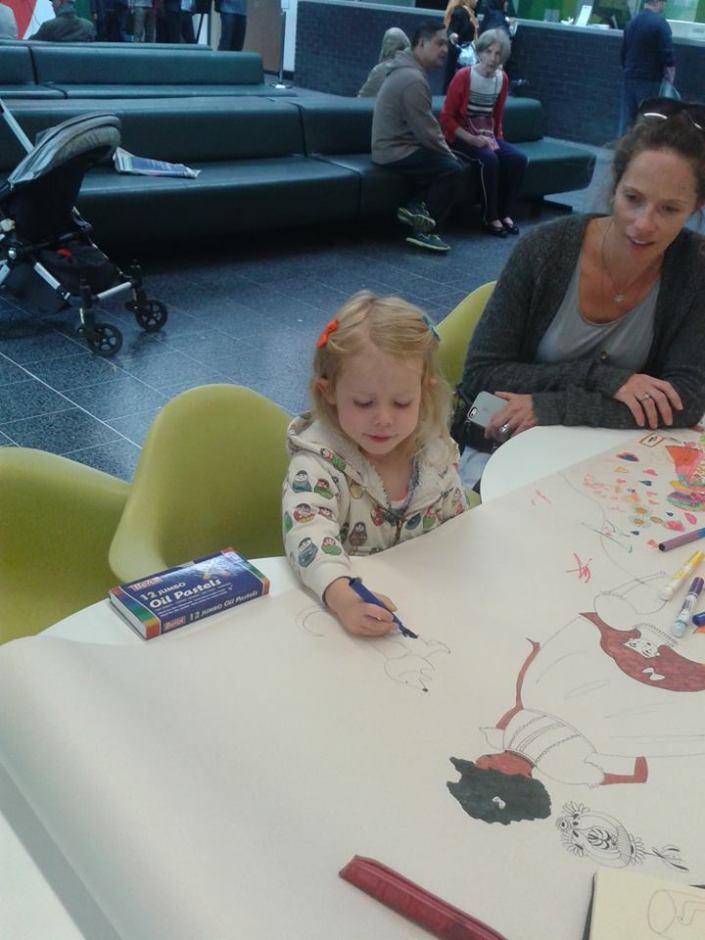 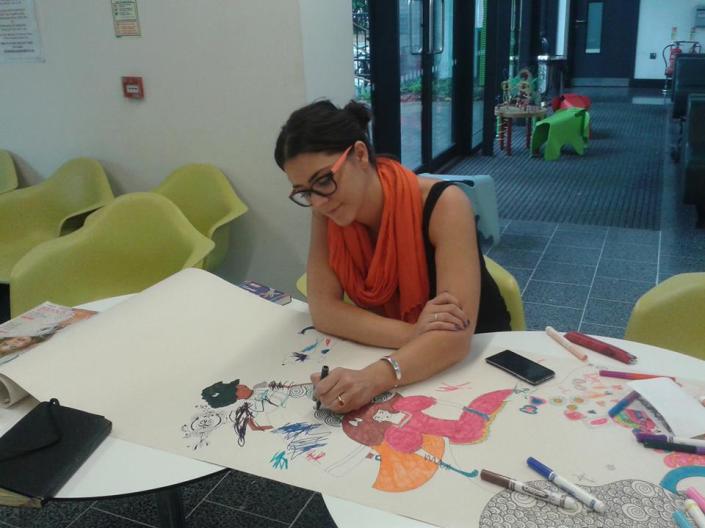 One such thing which has been in my thoughts a great deal in my late twenties is attitude from women towards other women; I’ve observed this throughout my life (especially in my teenage years and early 20’s).

When I was younger I would often get a gut feeling when witnessing  the behaviour and comments of girls to their friends; so often I’d hear the back-handed compliments, sarcasm and bitching to others about that person, be it there looks, aspirations or goals.

I think it’s fair to say that I was rather naive in my younger years and despite my gut feeling I would tell myself it was just me being over cynical (looking back I wish I might have trusted my own instinct more) maybe understood what a back handed compliment sounds like!

Here are a few instances which stick in my mind (I’ll refer to these people as ‘Girl A’, ‘girl B’ etc:

When preparing for a photograph Girl A finds herself standing next to a beautiful ‘popular’ girl,

Girl A: ‘You’re too pretty you’ll make me feel ugly standing next to you!’

Girl A’s best best friends Girl B : ‘Stand next to me instead’ (in a modest, jovial manner)

My seventeen year old self felt very uneasy but could’t fully understand why Girl A would say something like this.

Me and another girl we’ll know as Girl C:

Girl C: ‘Honey, I hope you’ve brought something to change into and aren’t wearing that out!’

(this was one small thing amongst many a bitchy comment with Girl C).

Yet I felt a moral obligation to girls A and C, despite what I’ heard their comments to others and me as at times I felt they had been ‘good friends’.

This really has been something i’ve seen time and time again, It’s always women being nasty to one another, rather than be happy for their friends achievements or how well their friend is looking they just want to put them down or talk behind their back about how unfair it is this friend is getting more male attention or doing ‘better’ than them.

So what better way to vent these thoughts and feelings than on canvas, I’ve recorded the development below:

I’d started this piece several weeks back and had left it one side unfinished and today it occurred to me to go back to it for this piece…..the initial image in my head was a ghostly image of two women, maybe one tugging at the others hair or in some way appearing to be competing against the other. 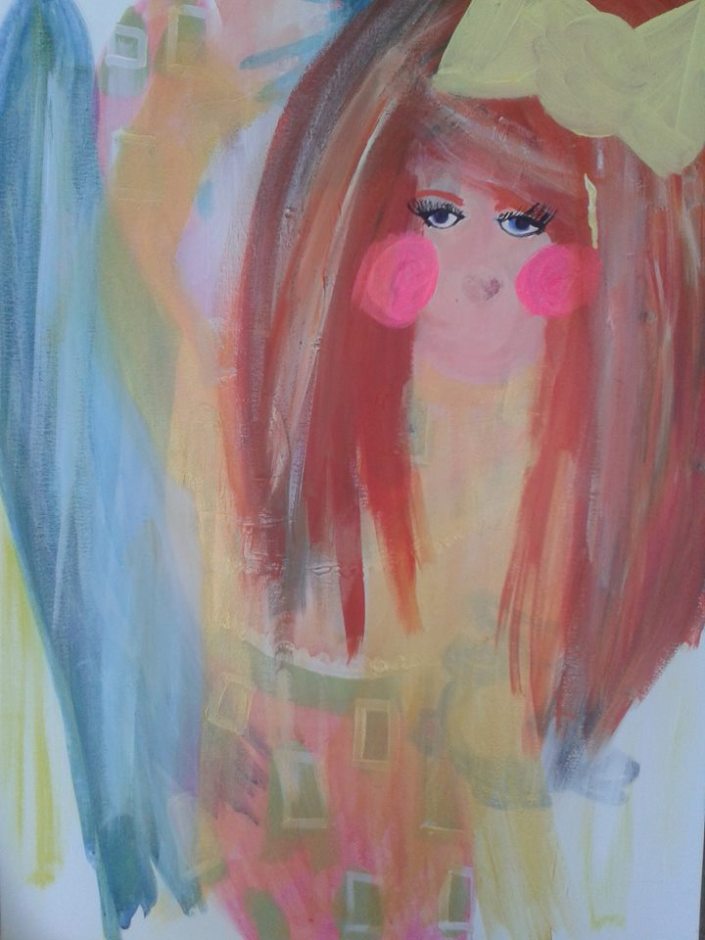 As ideas have developed and painting instinct taken over a new women is predominantly in front of the first, leaving few traces of the original lady…………

This is just the start, i want to take my time and see how the ideas for this piece develop

Thursday morning I held my second ‘Interactive Art Event’ at Free Space Gallery. The first workshop was held on a Thursday evening bringing in a viewers of the A41 project and the second on Thursday morning during surgery times (‘Free Space Gallery‘ is part of Kentish Town Health Centre). Thank you to all who came along, you really brought helped brig the wallpaper to life and a huge thank you to those who donated to Breast Cancer Care & Beating Bowel Cancer. 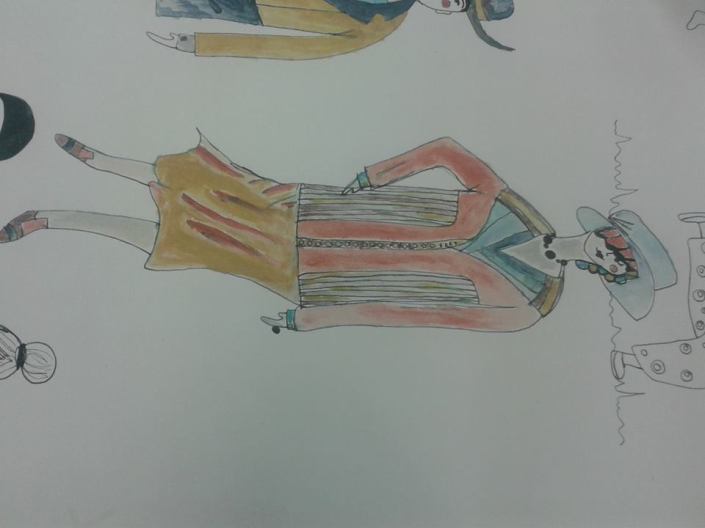 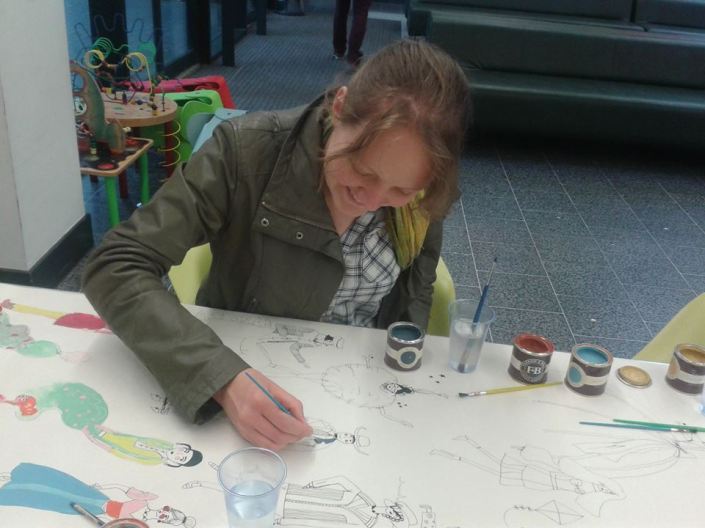 Friday was my last ‘Stress Busting Colouring workshop’ at CGP Gallery, In which I have run six workshops altogether (one every Friday during the school Summer holiday period).

I created a new roll of Interactive Wallpaper for these workshops in which families have been dropping into the gallery to add their mark to……..What a wonderful few weeks it has been! the development has been mapped onto the wallpaper as it’s grown, becoming brighter, flamboyant and even chaotic in places….I LOVE IT!

Please keep an eye out as I have been discussing some exciting fundraising plans with the people at Beating Bowel Cancer this wallpaper is just the start.

I’d also like to say a huge Thank you to all of the adults and children who came along and contributed to the wallpaper, you really have brought it to life! 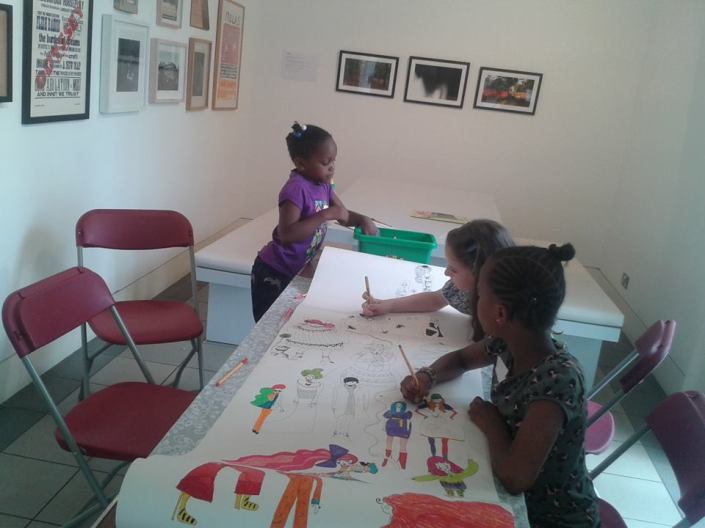 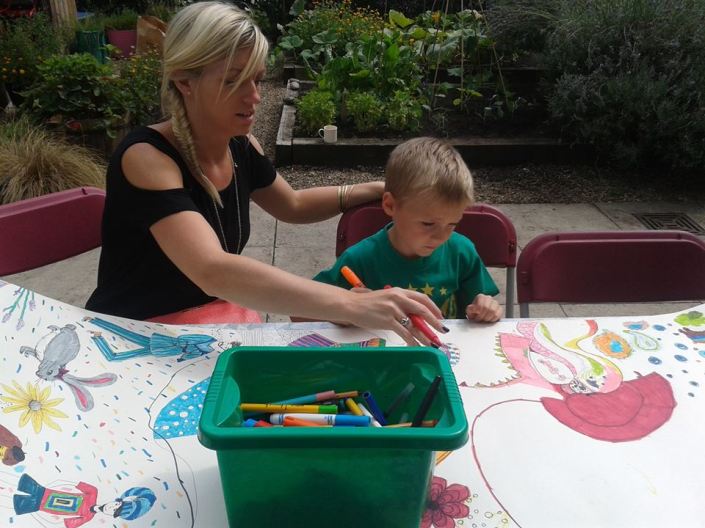 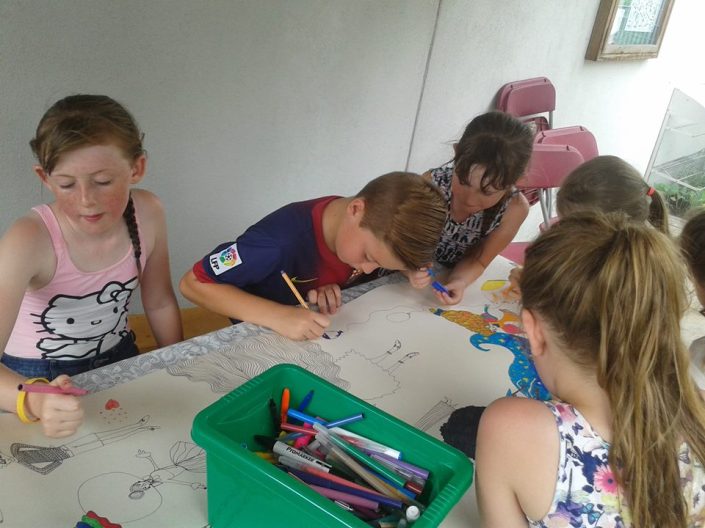 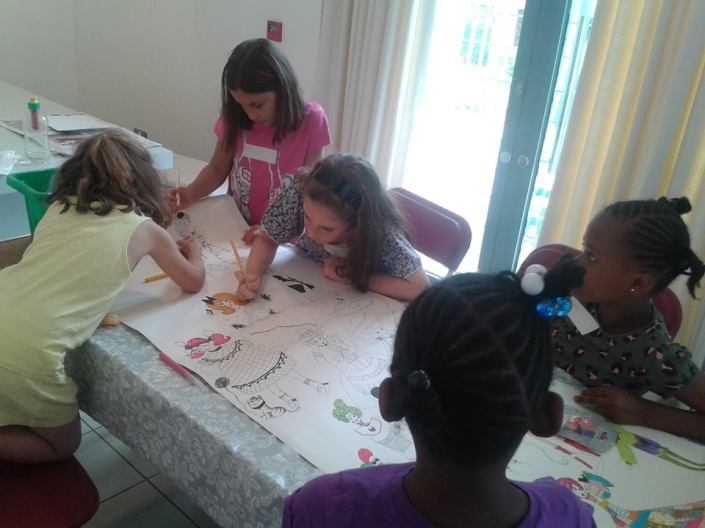 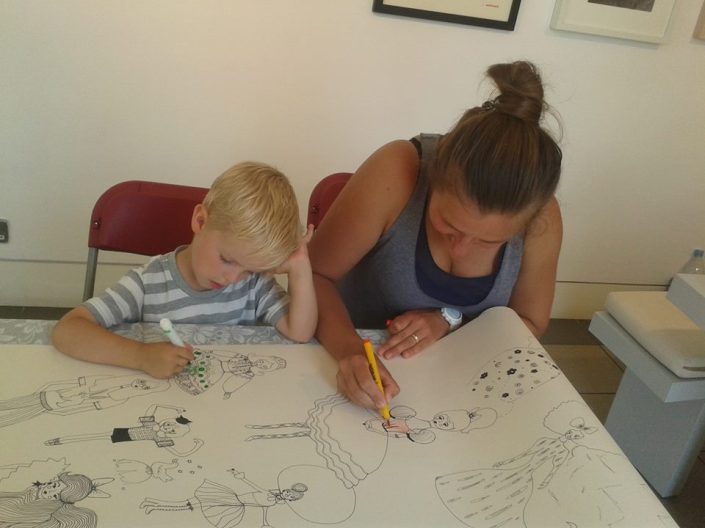 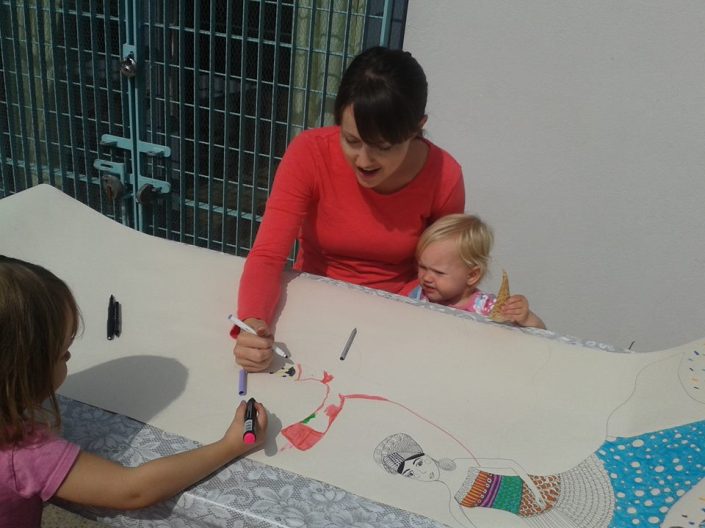 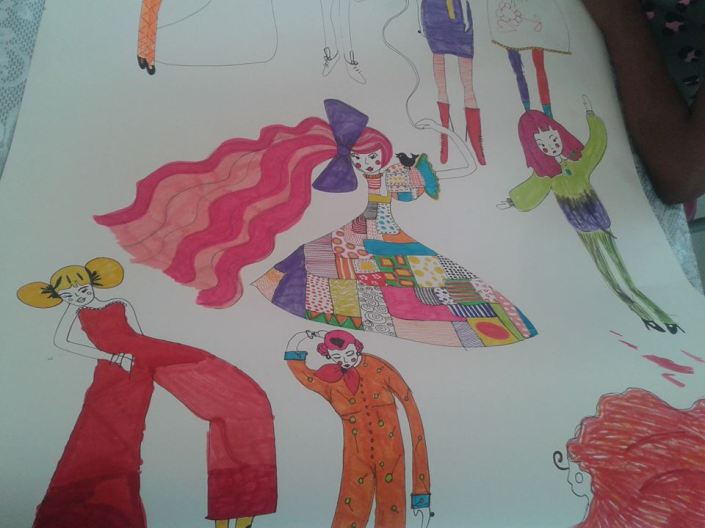 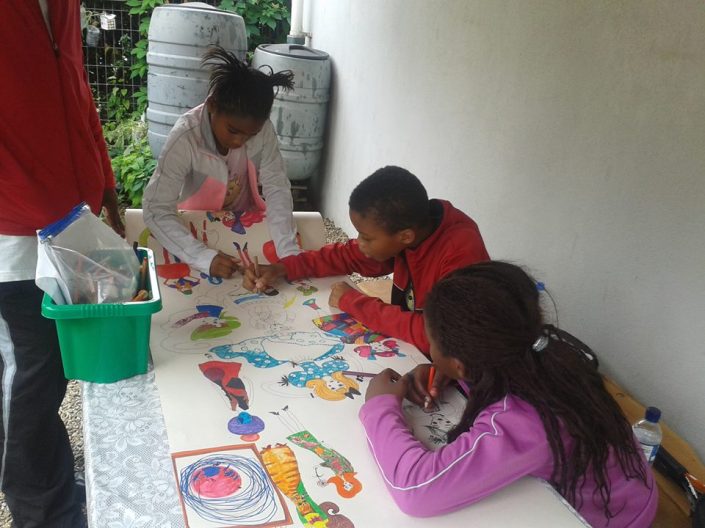